The story of Jim’s Jerky began 16 years ago, when Queensland graziers Jim and Cathie decided to start making beef jerky. In their first month they created 12kg volume of jerky and had to figure out how to sell it! From their humble beginnings as a small butcher shop in Charlton, just west of Toowoomba, the manufacturing space has grown to incorporate four other shops on that strip and now sells to over 300 stockists around Australia.

Daughter and now CEO Emily Pullen joined the family business in 2015, and says the last five years have been one big learning curve as she’s worked with her parents to grow the business together. “Working with my family has been the most rewarding experience,” Emily says, and notes that even though the business has grown over the last few years, they still pride themselves on being family-owned and operated.

Jim’s Jerky manufactures a range of beef snacks including biltong and beer sticks, but they are most famous for their jerky. Emily says, “It was a new type of jerky when it first hit the market – different to the traditional varieties available 15 years ago; and has been delighting jerky eaters all over Australia ever since.“

Jim’s Jerky call their product the “taste of Australia”, believing an important aspect of Aussie cuisine has been the adopting and melding of flavours from other cultures around the globe. So, while using only quality Australian cattle, they create all kinds of flavours from their major hit “Original” to refined artisan varieties like Teriyaki and Salted Caramel. Emily says they refer to their headquarters as their Jerky Cellar Door, “you can sample everything we make and find flavours and varieties you can’t get anywhere else.”

When asked who their main client base is, Emily says, “Anyone who loves to snack. More and more people are thinking more about what they snack on and are looking for high protein, low sugar alternatives to chips and lollies.” The push toward healthier snacks is also reflected in their minimal processing and focus on quality ingredients. 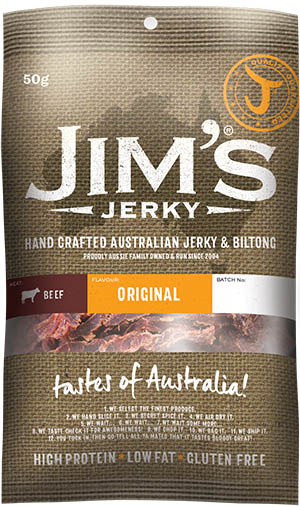 Their personal business motto is “Quality. Every time.” and it’s hard to argue with – but the direction they see the business going in the future? A cultural shift; “We just hope to keep producing fantastic beef snacks, and get more Aussies eating beef jerky.” With flavours like BBQ, smokey and honey soy available all across the country – that doesn’t seem like such a stretch.